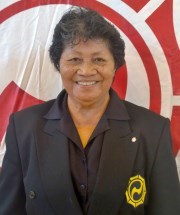 Sensei Beaty began her career in karate after marrying her husband Shihan David Bennett. She has visited Japan many times. The first was in 1987 when she gained her Shodan grading under Soke Hoshu Ikeda. Her happy go lucky nature have made her a favourite with our friends in Japan.

Throughout the years Beaty Sensei has competed in many tournaments entering as many as she could in order to gain the experience you can only get by putting your skills to the test. She has won many events and her favourite placing was when she beat her husband, Shihan David Bennett, in the Shiwari (board breaking) competition.

She gained her Shodan grade in 1987, with subsequent grades of Nidan in 1991 and Sandan in 2000. Yondan grade was achieved in 2014 after the 45th Jyoshinmon Anniversary Festival in Tokyo, Japan.